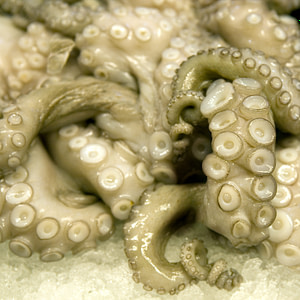 Konnichiwa! Welcome to Tentacles Slime & Sheets, the second post in our final segment ‘A Freak On Top Of the Sheets’.  Today, we’re delving in to a fetish that spread from Japan to the West with extreme enthusiasm.

As with the rest of this final segment, the fetishes discussed here might seem a bit more bizarre or ‘hardcore’ compared to your usual bedroom activities, but that’s what makes them so fun and interesting!

Whether you take fetishes that catch your fancy to the extreme or simply like to gain a slither of inspiration from them, we hope these final few articles inspire and educate all our amazing sheet-loving readers.

As it happens, a ‘tentacle’ is an appendage that has suckers at the end of it, not all the way along the limb. Tentacles tend to come in pairs and are more common on cephalopods such as cuttlefish and squid. As for octopuses? Their limbs are known as arms (or, to be more precise, six of them are arms and two essentially function as legs). However, that hasn’t stopped us all from colloquially dubbing the limbs of an octopus ‘tentacles’ nor from creating one of the more bizarre, fascinating, and rebellious fetishes out there involving the term.

An Introduction to Tentacle Fetishes

Notions of rape might alarm some people at first, but it’s important to remember that rape fantasies are not indicative of a desire to be raped or to rape someone. As it happens, rape fantasies are actually some of the most common form of fantasies out there: with 31 to 57% or people fantasising about rape at least once a month.

This isn’t to say that such people want to be raped, rather they want to explore the power dynamic of having control taken away (or imposed upon them) by a dominant force in a manner that is safe and in their control (their own mind). When you think about rape fantasies in this context then they’re actually a rather complex and interesting way of people taking control and authority over something that would otherwise leave them completely powerless.

Tentacle rape adds another layer to this internal dynamic by adding a cultural one in to the mix. Originally Shunga works such as Hokisai’s The Dream of the Fisherman’s Wife, were about mutual pleasure from a woman’s perspective (the sea creature’s involved being so inhuman so to easily shift focus), allowing for rather radical explorations of this topic. This, however, couldn’t technically be called tentacle ‘rape’, as it was consensual.

The modern tentacle rape is something that Urotsukidōji’s creator, Toshio Maeda, suggests he used as a ‘get around’ for the strict Japanese censorship laws – which prohibited showing penetration from a penis but not anything else. Scholars have argued that the popularity and proliferation of such non-consensual sexual acts (and the fascination they elicited) came about as a response to the trauma of WWII and what it meant for the nation. Nowadays most people generally just enjoy the content and scenarios caused by tentacle porn, creating a strange fetish that stems from an amalgam of radical female representations, protests against censorship, and the collective experiences of a war-torn nation. Also there’s usually goo involved.

As one might imagine, the notion of having sexual interactions with a tentacle appeals for a variety of reasons – a prevailing one definitely being sensation.

The arm of an octopus is a fascinating limb in terms of sensation and texture. It starts with the typical tapered tip that would allow most people to ease in to penetration before widening to add a girth element. The suckers have their own look and feel and the idea of having something grasp at the skin with multiple sucking motions is enough to make anyone consider buying one of the many silicone, glass, or other material suction cup sex toys that have been produced.

Such fetishes are, quite simply, an interest in the sensation and experience of being slathered in or covered in a slimy substance. Sometimes this involves penetration, sometimes the entire body, and very often both.

Naturally, this is where we’d like to think that our sheets come in to play. With one of our products tentacle lovers will be fully liberated to explore their desires and (much like an artist or filmographer trying to defy conventions) will be able to break free of the boundaries of daily life in order to indulge in some kinky cephalopod action.

Of course, given the potential cultural appropriation, sensitive power dynamics, and non-human elements of tentacle play, we do recommend that anyone who wishes to explore it with a new partner does so with care and respect for their boundaries. It pays to emphasise a focus on the tactile enjoyment that you can get from tentacles and slime and to address any concerns (or preconceptions) that they may have at the notion.

If you do want to bring in a ‘rape’ or power dynamic then make sure that you explain why, what it means to you, and that you address any concerns or discomfort that they may have. Make it very clear that, although this is a fantasy where power is taken away, both parties ultimately have the full range of consent and autonomy as with in any other sexual situation.

No matter the outcome, or how experienced you are with the teasing textures of tentacles, you can rest assured knowing that our sheets are available to allow that goo and tentacles can slide over the body freely.